Three New Psalms Lessons Just Added! The Psalms unit is now 15 lessons instead of 12. Please feel free to comment on the lessons as you use them so that we can use that feedback to make improvements. :-)

2) Songs: Start the Story Hour with the learning our names song. Go around the circle or table and introduce each child.

Here is a simple song to reinforce the story today: sung to the tune of "This Old Man"

For credits and to listen to this song, click here: http://www.kidssundayschool.com/Gradeschool/Songs/1song01.php

3) Prayer... Praise God for his power over all creation and every nation!

4) Theme: Remind the children of the theme of the unit: God works among his covenant people to prepare the world for the Savior. Hebrews 12:1&2 “Therefore, since we are surrounded
by so great a cloud of witnesses, let us… look to Jesus.” Tell them that they are going to hear a Bible Story again today that shows how God works through Moses. God shows that he is more powerful than any earthly king, and more wise than any earthly wise man.

5) Bible Story: Today’s Story is about Moses and the 10 plagues. Read pages 86-95 from the Read and Learn Bible (Scholastic). 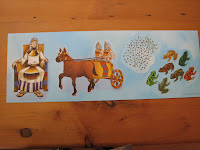 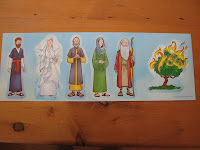 You can use the Pharaoh, Moses, Aaron and plagues (frog and flies) pieces to help tell the story today.

6) Text: Today’s Text is: These things will happen "so that you may know there is no one like the Lord, our God." Exodus 8:10b

There are pictures of all 10 plagues here: http://coloringbookfun.com/moses/index.htm 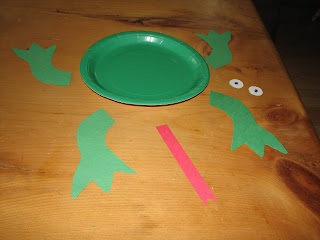 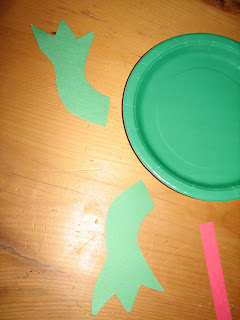 ( I cut all the legs with the same pattern, and then tucked the front legs under the plate a bit further to make them a little shorter. This cut down my "prep" time!) 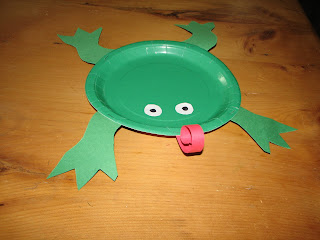 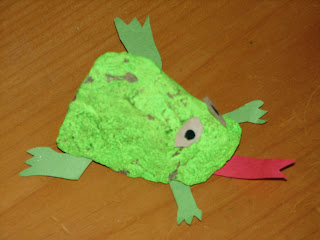 Experiment with the glue you have available first to see how well the arms, legs and eyes attach as there is nothing so disappointing as a limb-less frog. :-( White glue worked, but my daughter wanted to play with the frog right away. We tried it again with a glue gun and found the results much more satisfying. On the down side, you need to do the gluing yourself. 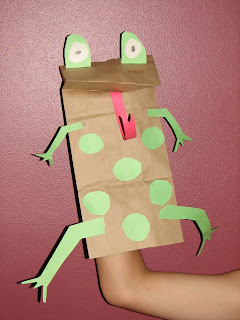 8) Prayer.. say the Lord's prayer together with the children.

9) Going Home: .Sing the closing together. Then, check to see if all the children have collected their crafts and coloring sheets before they go home. Say goodbye and tell them that you enjoyed learning about God together and were happy to have them today! You were, weren’t you?

Genial brief and this post helped me alot in my college assignement. Say thank you you on your information.

I've been searching high and low for a craft on teaching the 10 plagues. Could you please so kindly send me the document you prepared for the mini booklet?

My email is edwinpriscilla@yahoo.com
I'm from Damansara Utama Methodist Church, Malaysia. Thank you so much! God bless you!

Great site and ideas!!!
Could you please send me the document you prepared for the mini booklet? I would love to use it with my Sunday school class. Thanks!
mestlers@yahoo.com

Great site and ideas!!!
Could you please send me the document you prepared for the mini booklet? I would love to use it with my Sunday school class. Thanks!
mestlers@yahoo.com

Thank you so much. I have been looking for a site that is geared to the little ones-pre K and this is exactly what I wanted. God Bless you for all your work and effort.

hi, i'm a sunday school teacher in outer mongolia and i really appreciate sites like yours that offer FREE ideas, especially for crafts. and i love the ten plagues song - thanks for sharing that link! you have lots of great ideas that really helped with my lesson plan. thank you.

Could you send me the mini book pictures? Thank you in advance! tinymarler@gmail.com

I was wondering if you could please send me the mini book doc.? Thank you!

I was wondering if you still had the document for the mini-book available? I would love to put to good use all the hard work you did to put the book together :) Thanks!!

I am a teacher of 3-5yr olds in Trinidad & Tobago. Thank you for these ideas designed for my age group. We will have fun learning more about our great God who saves! W

Hi. I am a Sunday School teacher in NH and am teaching about Moses and how Gos used him. Thank you for these resources :)

Could you please send me the document you prepared for the mini booklet? I would love to use it with my Sunday school class. Thanks! My email address is suikyieng@yahoo.com.
Thanks.

i would love to use the mini book document that you have posted. It is great!!
mtduffell@gmail.com

Thank you for this information. Could you please email me the pages for the plague booklet? Thank you julneg@hotmail.com

Thank you for the great ideas! I am a sunday school teacher in Tn! Could you please send me the document you prepared for the booklet?

I`ve found your helping site. I will be teaching the same story this week. Would you mind if you can share with me this 10 plagues booklet. Thank you so very much.
This is email add: mj_lindnergoetze@yahoo.de.

I can't wait to sing the plague song tomorrow in our "Scripture tots" class. Thank you SO much!

Could you send me the documents you prepared for the 10 plagues mini book? I am excited to use this is our homeschool lesson this week. It will be a great compliment to our My Fathers World lesson:)
krisite.lee.13@gmail.com

Hi could you send me the doc. you prepared for the mini booklet? It would be greatly appreciated! Thanks, My email is sandrawiebe7@hotmail.com

I will be your frequent visitor, that's for sure. pain relief Read a useful article about tramadol tramadol

I am a preschool sunday school teacher. I am would love to share the mini book with my students. Could you please email it to me? jenwyat04@hotmail.com

I teach Sunday school a small group of kids ranging from Grades 1 to 7 in one class. I like your lessons. I can adjust them for the older kids. I would love to have a copy of the mini book. My email address is: haywire311@hotmaildotcom

I am a Sunday school teacher. I am would love to share the mini book with my students. Could you please email it to me? ediec25@gmail.com

Could you please send me the document with the mini book color pages? I'm a children's ministry coordinator in Georgia! Thanks!
Megan
megan.lzbt@gmail.com

I would love to email you for the document but I can't find your email. Hopefully you will get this? I would love the document for the book - I would like to use it for our VBS this year. nkmeldrim (at) hotmail (dot) com THANK YOU!

Could you please e-mail me the document for the 10 plagues booklet. I would love to use it in my MOPS lesson for the preschoolers.

Thanks so much
Kathleen
kmrkat@yahoo.com

I am a Sunday School teacher in one of the churches here in the Philippines and I have been searching for a craft on teaching the 10 plagues. Thank you for your ideas.

May God bless you always.

Thank you for sharing the great ideas! I would love a copy of the document too: carriederr at msn.com Thanks so much!

Thank you for sharing the great ideas! I would love a copy of the document too: carriederr at msn.com Thanks so much!

I work at a Christian school on Guam. Would you please send me the document for the mini booklet that you put all the pictures on? Super Idea. My class will love it. THank you for sharing!!!

Wonderful ideas! I was in need of a craft idea and love the mini booklet on the 10 plagues. Can you send me the document: walbergs@verizon.net
Thanks so much!

Hi! Could I please have the template for the mini booklet?? Thanks so much!
mollyk@calvarymaricopa.org

Great ideas!
Could you please send me the document you prepared for the mini booklet? I would love to use it with my Sunday school class who are aged 5 to 8.Thanks!
kay_leslie@hotmail.com

I would love the mini book as well!
beckypetersen@hotmail.com

Hi,
Thank you so much for these wonderful ideas. Would you kindly email me the document of the 10 plagues for the mini book?
Thank you!
Shannon P.
North India
dineshannon@motimail.com

I would love the mini book as well! beckypetersen@hotmail.com Thanks! Becky Sunday School teacher, MN

I enjoyed your site. Would you please send the document you prepared for the mini book?

Thank you so much,
Debbie
startingoverx2@gmail.com

Hi! I LOVED these crafts and songs! I am from the Philadelphia Church of Christ! I am a new teacher and so excited! Could u send me.the document for the booklet? Thank u! My email is kfd12@msstate.edu !

Could u send me the booklet like you made? thanks so much. great lesson. starkidansley@hotmail.com

great lesson my student enjoyed the making of the craft. Thanks for posting it.

Would you be so kind as to email me the mini booklet for the 10 Plagues? That would be great for this Sunday's lessons. My email is shannon@libertyheights.org (based in Cincinnati, OH)

please coud you email me the booklet. thanks so much for the time you, and other free sites, put in it really does make a difference when i plan activities for my toddlers. songs to tunes they already know usually go down really well, in fact every week we finish with a special thank you song to the tune of twinkle twinkle little star so i'm looking forward to giving this one a go.
i run a toddler group and a messy church
thanks again
clare
ca.pugh@virgin.net

Thanks so much for all the wonderful ideas from Bible Story Hour. We enjoy your ideas for our family morning devotions. I would so much like to use your booklet of the 10 plagues. I teach my son and daughter's sunday school in Indonesia and would love to use them with my class. My email address is hopeful harmony@gmail.com Thanks and Blessings to You.
Bible Fellowship Church of Indonesia

hello there biblestoryhour.blogspot.com owner found your blog via Google but it was hard to find and I see you could have more visitors because there are not so many comments yet. I have discovered website which offer to dramatically increase traffic to your website http://mass-backlinks.com they claim they managed to get close to 4000 visitors/day using their services you could also get lot more targeted traffic from search engines as you have now. I used their services and got significantly more visitors to my website. Hope this helps :) They offer most cost effective services to increase website traffic at this website http://mass-backlinks.com

Hi, Could I get the document for the 10 plagues mini booklet? My 2 to 4-year-old class is learning about this on Sunday, and I think they would really enjoy making and colouring the book. Thanks!

Thanks so much for the great ideas, they will help with this weeks Sunday School lesson.
Blessings.
Carol

hi,
I am creating the curriculum for one of our groups at our church.they range in age from 3-6 and I think you booklet would be great. Would you send me the document for the 10 plagues mini-booklet?

All about Bible Story Hour: